(iii) They coordinate functioning of different organs of body.

Question 3.
Write short notes on the following:
(а) Cytoplasm
(b) Nucleus of a cell.
Answer:
(a) Cytoplasm:
Cytoplasm is a jelly like substance which is present between the cell membrane and the nucleus. Various other organelles of cells are present in the cytoplasm. Cytoplasm is made up of chemical substances like carbohydrates, proteins and water. These chemical substances are present in cells of all types and sizes.

(b) Nucleus of a cell:
Nucleus is the master of the cell. It commands all the functioning of the cell. It is generally located in the centre of the cell and is spherical in structure. A membrane called nuclear membrane separates it from cytoplasm. It contains the genetic material (DNA, RNA) in it. This porous membrane allows the transfer of material in the nucleus and cytoplasm. Nucleus contains a dense body called nucleolus which actually contain chromosomes the genetic material.

Question 4.
Which part of the cell contains organelles?
Answer:
Cytoplasm. 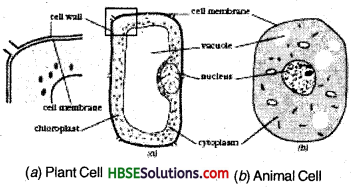 Question 7.
Where are chromosomes found in a cell? State their function.
Answer:
Chromosomes are found in the nucleus of a cell. Their function is to carry characteristic features of parent cells to the daughter cell i.e. from parent to offsprongs.

Question 10.
Complete the following crossword with the help of clues given below:
Across
1. This is necessary for photosynthesis.
3. Term for component present in the cytoplasm.
6. The living substance in the cell.
8. Unit of inheritance present on the chromosomes.

Down
1. Green plastids.
2. Formed by collection of tissues.
4. It separates the contents of the cell from the surrounding medium.
5. Empty space in the cytoplasm.
7. A group of cells. 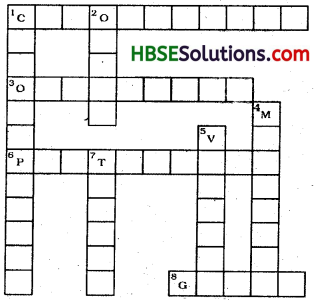 1. Visit a laboratory for senior secondary students in your school or in a neightbouring school. Learn about the functioning of a microscope in the laboratory. Also observe how a slide is observed under the microscope,
Answer:
For self attempt.

2. Talk to the senior biology teacher in your school or a neighbouring school. Find out if there are diseases which are passed on from parents to the offspring. Find out how these are carried and also if these diseases can be treated. For this you can also visit a doctor.
Answer:
There are certain diseases which are passed on from parent to the offspring. Diseases like diabites, heart diseases, certain skin diseases like leukoderma, etc. are genetic diseases.

3. Visit an agriculture extension centre in your area. Find out about genetically modified (GM) crops. Prepare a short speech for your class on this topic. You may visit www.usc.ernet.in / currsci / sep2520Ql/ 655.pdf
Answer:
For self attempt.

4. Find out about Bt cotton from an agriculture expert (or from envfor.nic.in/ division/csnrv/btcotton/b gnote.pdf). Prepare a short note on its advantages / disadvantages.
For more on cell, visit: www.enchantedlearning.com/subjects/ plants/ cell/
Answer:
For self attempt.

Question 1.
Define a cell.
Answer:
A cell is the basic structural and functional unit of living things.

Question 4.
In which cells, cell wall is present?
Answer:
In plant cells.

Question 6.
Where are chromosomes present in a cell?
Answer:
Nucleus.

Question 8.
Which cell organelle is found only in animal cell?
Answer:
Centrosome.

Question 9.
Name the cells organelle which is found only in plant cell.
Answer:
Plastids.

Question 10.
How do cells increase in numbers?
Answer:
By cell division.

Question 11.
Which organelle is called the ppwer house of the cell?
Answer:
Mitochondria.

Question 12.
Which organelle is called suicidal bags of the cell?
Answer:
Lysosomes.

Question 13.
What does mitochondria do?
Answer:
It prepares food for plants.

Question 14.
What does chromosomes do?
Answer:
Transfer chracters from one generation to another generation.

Question 15.
What does ribosomes do?
Answer:
They help in synthesis of proteins.

Question 17.
What is the unit of measuring the size of the cell?
Answer:
Microns.

Question 2.
Why are the mitochondria known as the power housd of the cell?
Answer:
They are rod shaped and very minute. They are concerned with the release of energy from food during respiration. Because of this, they are often referred to as the power house of the cell.

Question 3.
What are the cell organelles? What are their functions?
Answer:
Cell organelles are small active living structures found in cytoplasm of cell. Each organelle has different structure and performs different function for cell. They are endoplasmic reticulum, Plastides, Mitochondria, Ribosomes, Golgi bodies, Centrosomes, Lysosomes, Vacoules.

Question 5.
Name four elements which form major part of protoplasm?
Answer:
Ninety nine percent of protoplasm by its weight is made up of four elements. Namely; Carbon, Hydrogen, Nitrogen and Oxygen. It also contains other elements such as H20, Carbohydrates, fats, proteins and mineral acids. Both elements and compounds in unique combination provide living nature to the protoplasm.

Question 7.
Why Hooke had to take thin slices of cork?
Answer:
The cork was solid and the details of cork could not seen in solid state. So he made thin slices to see the details of the cork. He saw space in cork slice which appeared like honey comb, called these compartments as cells.

Question 8.
What do you know about cell shape?
Answer:
Cells are of diverse shapes. Some cells are like Amoeba and white blood cells of our blood. They continuously change their shape. Most cells, however, maintain a constant shape all through their existence.

Question 9.
Write about size variation of the cells.
Answer:
Cells vary in their size. The smallest known cell is bacteria measuring about 0.5 micrometre. Nerve cell is up to 1 metre long. The heaviest cell is of ostrich and acetabulum is the largest unicellular algae which is about 10 cm long. Majority of cells in plants and animals range from 20 to 30 microns in diameter.

Question 11.
What is nucleolus?
Answer:
Nucleolus is a small spherical dense body present in the nucleus. It is only visible, with a microscope of a higher magnification.

Cytoplasm:
It is jelly like substance occupied most of the inside of the cell. It occupies the space between the cell membrane and the nucleus. All the life functions take place in the cytoplasm. It contains many important tiny structures called the organelles, which performs the various life functions.

Question 2.
Write the functions of cell organelles.
Answer:
(i) Mitochondria: It performs the function of respiration provide the cell with energy.
(ii) Endoplasmic-reticulum: It is a network of membrane, it provides large surface area for life function to take place.
(iii) Chloroplasts: These are green in colour, contain green pigment chlorophyll which help in food manufacturing in plants.
(iv) Golgi complex: These collect and distribute substances made in the cell. Synthesis and secretions of many materials.
(v) Lysosomes: Certain enzymes which help in breaking down or destroying various unwanted materials of cell.
(vi) Centrioles and centrosome: It helps in cell division in animal cells.
(vii) Ribosomes: They help in protein synthesis.
(viii) Vacoules: These are generally stored inside clear space in the cytoplasm.
In animal cells they are very small. In plant cells they are large and greater in number.

Question 3.
Differentiate between the plant cell and the animal cell.
Answer:

1. All organisms are made of small basic structural and functional units.
2. These smallest functional units are called cells.
3. Robert Hooke observed a cell for the first time in 1665.
4. Cells can be defined as the basic structural and functional unit of life.
5. Cells are of different size and shape.
6. Living Organisms made up of a single cell are called unicellular organisms.
7. All unicellular organisms are microscopic organism e.g. Amoeba, Paramecium etc. i.e. they cannot be seen with naked eyes.
8. Some cells can be seen with naked eyes without any aid e.g. egg of a hen.
9. In unicellular organisms, the single cell perform all the function necessary for living.
10. A cell has different parts. These small parts of the cell are called organelles.
11. A cell is made up of cell membrane, which contains all the organelles in it.
12. All cell organellies are contained in cytoplasm.
13. In the centre of the cytoplasm nucleus is situated, which is the brain of the cell.
14. Mitochondria, Endoplasmic reticulum, chloroplasts, golgi complex, lysosomes, centrioles, and ribosomes are other cell organelles.
15. Cells which don’t have a well organized nuleus are called the karyotic cells. In these cells the nucleus lacks the nuclear membrane.
16. The cells of plants are a bit different from that of animals.
17. In animals, cell wall, chloroplast, chromosomes, vacoules are absent, while they are present in plant cells.
18. Green leaves have a special organelle called chlorophyll i.e. the Green plastids (chloroplasts) which helps in the process of photosynthesis.
19. Different colours of plastids give different colours to plants.