Question 1.
Explain the importance of reproduction in organisms.
Answer:
Reproduction is very important for the organisms. The organisms reproduce to produce young ones like them. It carries on their generation. If reproduction does not take place, no living being would survive on earth. Secondly, specials characters of an organism are carried over to its next generation through reproduction only.

Question 2.
Describe the process of fertilization in human beings,
Answer:
Human beings reproduce sexually. In human beings fertilization takes place internally i.e. inside female body. Males eject sperms inside females body. Sperms and ovum fuse to form the fertilized egg called zygote. During this process the nucleus of the sperm fuses with the nucleus of the ovum thus forming a single nucleus.
Thus zygote is formed with a single nucleus, this completes the process of fertilization.

(b) A tadpole develops into an adult frog by the process of:
(i) fertilization
(ii) metamorphosis.
(iii) embedding
(iv) budding.
Answer:
(b) metamorphosis

Question 7.
In which female reproductive organ does the embryo get embedded?
Answer:
Uterus.

Question 8.
What is metamorphosis? Give examples.
Answer:
Drastic changes which take place during the development of an animal is called metamorphosis. Animals like frog, butterfly undergo metamorphosis.

Question 10.
Complete the cross-word puzzle using the hints given below.
Across:
1. The process of the fusion of the gametes.
6. The type of fertilization in hen.
7. The term used for bulges observed on the sides of the body of Hydra.
8. Eggs are produced here.

Down:
2. Sperms are produced in these male reproductive organs.
3. Another term for the fertilized egg.
4. These animals lay eggs.
5. A type of fission in amobea. 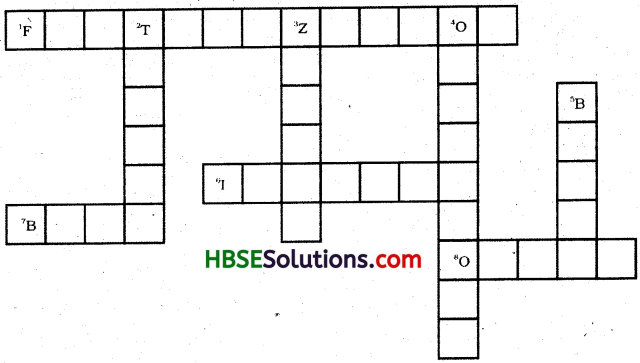 2. Observe live hydra yourself and learn how they reproduce by doing the following activity:
During the summer months collect water weeds from ponds or ditches along with the pond water and put them in a glass jar. After a day or so you may see several hydra clinging to the sides of the jar.

Hydra is transparent, jelly-like and with tentacles. It clings to the jar with the base of its body. If the jar is shaken, the hydra will contract instantly into a small blob, at the same time drawing its tentacles in.

Now take out few hydras from the jar and put them on a watch glass. Using a hand lens or a binocular or dissection microscope, observe the changes that are taking place in their body. Note down your observations.
Answer:
For self attempts.

3. The eggs we get from the market are generally the unfertilized ones. In case you wish to observe a developing chick embryo, get a fertilized egg from the poultry or hatchery which has been incubated for 36 hours or more. You may then be.able to see a white disc-like structure on the yolk. This is the developing embryo. Sometimes if the heart and blood vessels have developed you may even see a red spot.
Answer:
For self attempt.

4. Talk to a doctor. Find out how twinning: occurs. Look for any twins in your neighbourhood, or among your Mends. Find out ifthe twins are identical or non-identical. Also find out why identical twins are always of the same sex? If you know of any story about twins, write it in your own words.
You could visit the following website for information on twins: www.keepkidshealthy.com/twins/ expecting_twins.html.
For more information , on animal reproduction, you can vjsit:

Answer:
For self attempt.

Question 4.
What is another name for ovum or sperm?
Answer:
Gametfe.

Question 6.
What is formed when male and female gametes fuse?
Answer:
Zygote.

Question 15.
What does a zygote develop into?
Answer:
Embryo.

Question 16.
Where does an embryo grow in case of internal fertilization?
Answer:
In uterus.

Question 17.
What does an embryo grow into?
Answer:
Foetus.

Question 18.
Where does an embryo grow in case of external fertilization?
Answer:
Out side in open.

Question 19.
What are the animals called, who give birth directly to young one?
Answer:
Viviparous animals.

Question 20.
Give at least two examples of viviparous animals.
Answer:
Humans and cows.

Question 21.
What are the animals called, who lay eggs first?
Answer:
Oviparous animals.

Question 23.
How many developing stages an egg of a frag undergoes to become an adult?
Answer:
Three: Egg, Tadpole, larvae, adult.

Question 24.
What do we call the sudden and extreme changes taking place during the development of an animal?
Answer:
Metamorphosis.

Question 4.
Explain the reproductory organs of female in human beings.
Answer:
In human beings the female reproductoiy organs are a pair of ovaries, oviducts or fallopian tubes and the uterus. Ovaries are responsible to produce female gamete called ova, which fertilize with male sperm in female fallopian tube and travels to uterus for its development into embryo and the foetus.

Question 5.
Describe the human male and female gametes.
Answer:
In human beings the males produce the gamete called sperms. Sperms are very small in size. They have a head with a middle piece which end into a tail. It is a single cell. Similarly, female gamete ova is produced by ovaries. Every ova is a single cell and one matured ova is released by one ovary every month. 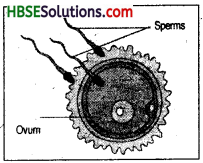 Question 7.
Explain how external fertilization takes place?
Answer:
In this case the females lay eggs in slow moving streams. The males also release sperms on this cluster of eggs. The sperms move in water with the help of tail and when come in contact with egg, they get fertilized.

Question 8.
How is an embryo formed put of a zygote?
Answer:
Zygote is a single cell formed by the fusion of male and female gametes. It undergoes repeated numbers of division to form a lot of many cells, so that the limbs and other parts can be developed. Thus a single zygote gets divided to form an embryo.

Question 9.
How is an embryo formed in case of hens?
Answer:
In hens zygote divides many times and reaches the oviduct. During this a protective outer coating is formed around the embryo. The complete embryo develops inside this protective shell. This embryo is laid by the hen along with the shell as an egg. This egg finally hatches after ‘ three weeks to produce chick.

Question 10.
What is budding?
Answer:
Budding is an asexual method of reproduction in animals. It needs only a single parent to reproduce. The body of the animal starts developing a small bulging structure called bud which slowly grows and have itself disconnected from the parent animal and becomes a separate individual. This is called budding. Animals like hydra reproduce through budding.

Question 11.
What do you mean by binary fission?
Answer:
Binary fission is a method of asexual reproduction. In this method the body of the animal divides into two halves. The nucleus of the body divides into two and this is followed by the division of the whole body. So, two organisms get produced with separate nuclei. Animals like Amoeba reproduce by this method.

Question 12.
What is cloning?
Answer:
Cloning is a method of producing an identical organism, a body part or only a cell. The produced organism or cell is completely identical to its original organism or cell. This method has been used many times in animals to produce identical clones.

Question 2.
Draw and describe the male reproductive organs in humans.
Answer:
Male reproductive organs consist of a pair of testes, sperm ducts and penis. Testes are responsible for producing male gamete called sperm. Sperm is very small in size. It has a head, a middle piece and a tail. Sperms travel through sperm ducts and penis, and are released in female body for fertilization. 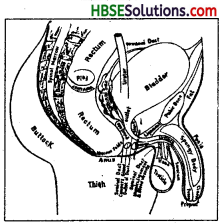 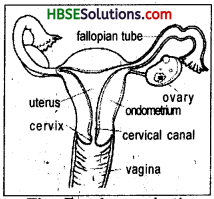 Ovaries produce the female gamete called Ova. Every month an ovary produces an ovum. The ovum and sperm fertilize inside fallopian tubes and the fertilized zygote travels to the uterus and attach with its wall to develop into the foetus.

Question 4.
What is fertilization? How does it take place?
Answer:
Fertilization is the process by which the male and female gametes fuse to form the zygote. The sperms from a male are transferred into the female body. They swim to the fallopian tubes with help of their tails and one of them enters the ovum to fertilize. When the sperm enters the ovum, the nucleus of both the gametes fuse with each other to form the fertilized zygote.