Question 2.
What was the dispute between Mohan and Raghu?
Answer:
Raghu had taken over some of Mohan’s land and increased the size of his own field. Angry Mohan went to Raghu’s house to make complaints. But Raghu did not accept what he had done with Mohan’s land. This caused a dispute between the two.

Question 3.
Why was Mohan worried about picking a quarrel with Raghu?
Answer:
Mohan was worried about picking a quarrel with Raghu because Raghu’s uncle was the Sarpanch of the village. Raghu was quite influential as his family owned many fields. None in the village had ever dared to confront him. Mohan, being a small farmer had picked up courage to make complaints about what Raghu had done.

Question 5.
The Khasra record of the Patwari gives you information regarding the map given below. It identifies which plot of land is owned by whom. Look at both the records and the answer the questions given below regarding Mohan and Raghu’s land. 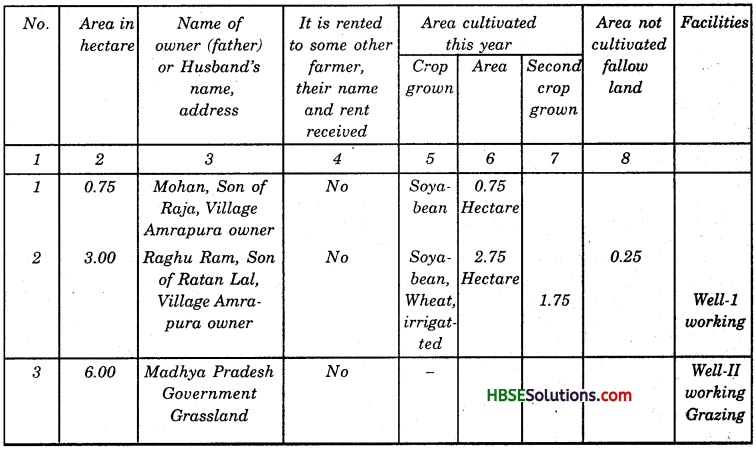 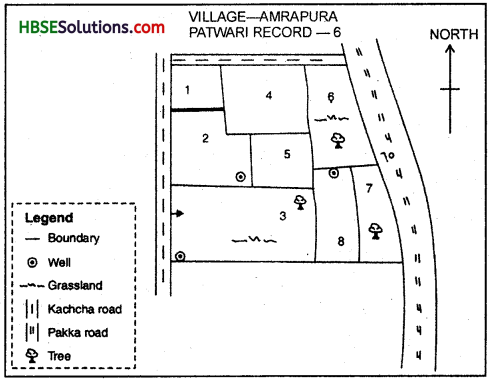 (1) Who owns the land south of Mohan’s field?
(2) Mark the common boundary between Mohan’s and Raghu’s land.
(3) Who can use field no. 3?
(4) What information can one get field no. 2 and field no. 3?
Ans.
(i) Raghu owns the land south of Mohan’s field.
(ii) Common boundary is marked with dark line.
(iii) Madhya Pradesh government can use field No 3.
(iv) The total area of field 2 is 2.75 hectare it belongs to Raghu who grows soyabean and wheat in this field. The land is not on rent and it is irrigated. Second crop is grown in 1.75 hectare. 0.2 hectare of the total area is a fallow land. There is one well in the field and it is working.

Field No. 3 belongs to Madhya Pradesh government. It is a grassland. It is not on rent. There is one well in the field and it is working. This grassland is used for grazing purposes.

Question 1.
What is the work of the police?
Answer:
The work of the police is to:
(a) maintain law and order to establish peace in the society.
(b) to register case of theft, accident, injury, fights etc.
(c) to inquire, investigate and take action on the cases within its area.

Question 2.
List two things that the work of a Patwari includes.
Answer:
(a) Patwari measures land and keeps land records.
(b) He organises the collection of land revenue from the farmers and provides information to the government about the crops grown in that area.

Question 3.
What is the work of a tehsildar?
Answer:
(a) A tehsildar supervises the work of the Patwari.
(b) It hears disputes.
(c) It ensures that records are properly kept and land revenue is collected.
(d) He also sees to it that the farmers can easily obtain a copy of their record and students can obtain their caste certificates etc.

Question 4.
What issue is the poem trying to raise? Do you think this is an important issue? Why?
Answer:
The poem emphasises on the rights of a girl child. It is trying to raise the issue of inheritance of daughters and mothers in the property of their father/husband.

This is an important issue because in our country before Hindu Succession Amendment Act (2003) women can not get a share in the family’s agricultural land and after her father/ husband death the property was equally divided among her sons. This poem highlights that Dowry is not a compensation to a girl child. It should be abolished.

The works of the Village Panchayat and Patwari are related to each other because they equally work for the welfare of the villagers. The revenue collected by Patwari is spent on welfare of the people.

Question 6.
Visit a police station and find out the work that the police have to do to prevent and maintain law and order in their area especially during festivals, public-meetings etc.?
Answer:
Police exercise following programs to prevent the crime and to maintain law and order in their areas:
1. Recruitment and deployment of Special Task Force to handle different crucial situations.
2. The police officer always keeps a vigilant eye on the criminals.
3. To ensure internal peace and justice (i.e. law and order position) these are kept open for twenty four hours a day.
4. During festivals they move with the public in civil dress, so that they can keep festivals free from apprehension of any mishappening.
5. To control the rush they make barrier and check post at various entrance.
6. Police can stop the people taking weapon inside the area/campus of the fair or festival.

Question 8.
How do women benefit under new law?
Answer:
New Law: Hindu Succession (Amendment) Act, 2005 is known as New Law.
According to this law, women in India can get a share in the family’s agricultural land. Women get equal share in the property/lands.
Benefit of Law: Women can get transfer land and even purchased land. They can also take share of family’s land or property.

Question 1.
What is called bund?
Answer:
The boundary that separates one land from another is called ‘bund’.

Question 3.
What is the work of Tehsildar?
Answer:
Tehsildar supervises the work of the Patwari and ensures that records are properly kept and land revenue is collected.

Question 1.
How would have Patwari decided whether the common boundary of Mohan and Raghu Helds had been shifted?
Answer:
Patwari would have measured both Mohan’s and Raghu’s fields and compared them with the measurements on the map. If they did not match, then it was obvious that the boundaries had been changed.

Question 1.
Explain the right of women in property before and after Hindu Succession Amendment Act, 2005.
Answer:
Before:
1. Hindu women did not get a share in the family’s agricultural land.
2. After the death of the father, property was divided equally only among his sons.

After:
1. In the new law sons, daughters and their mothers can get an equal share in the land.
2. The new law will benefit a large number of women.
3. They can enjoy their independent status with equal rights.