Question 1.
List at least four different tasks that the Municipal does.
Answer:
1. It manages to collect garbage and disposes of in the proper place.
2. It takes care of the situation of the town.
3. It builds roads and repairs them whenever required.
4. It takes care of the water supply and keeps the streets and roads clean.

Question 2.
Fill in the blanks in the sentences below.
1. In a panchayat the elected members are called ———— .
2. The city is divided into several ———— .
3. In a municipal corporation the elected members are called ———— .
4. Group of councillors deal with issues that affect the ———— .
5. Elections are held once every ———— years for the panchayat as well as for the municipality.
6. While the councillors make decisions the administrative staff led by the Commissioner ———— these.
Answer:
(1) Panchs
(2) Wards
(3) Councillors
(4) entire city
(5) five
(6) implement

Question 4.
What did Gangabai do and why?
Answer:
Gangabai and women in the locality were upset over the garbage lying in the streets and unhygienic condition of the society. Gangabai proposed that it was the Ward Councillor who they should go to. Gangabai was confident that they had the right to do so as they were ones who elected him. 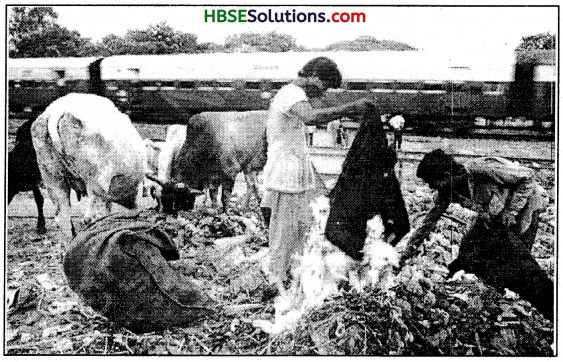 2. Dangers of collecting garbage in the manner shown in the photograph-1 are:
(i) The animals roaring around garbage dump may cause injury/harm/ hurt to them personally.
(ii) Always a fear of being get seriously ill or fall in the grip of serious diseases.

3. Municipalities have less facilities and transportation available to dispose garbage as compared to the corporations. In other words corporations are meant for big cities or Metropolitian cities. Due to growing population and slums a number of steps were taken by corporations to over come these problems. So, ways of disposing garbage are less available to those who work in municipalities.

Question 7.
Several poor people in the work as domestic servants as well as work for the Corporation, keeping the city clean. Yet the slums in which they live are quite filthy. This is because these slums seldom have any water and sanitation facilities. The reason often given by the Municipal Corporation is that the land in which the poor have set up their homes does not belong to them and that slum-dwellers do not pay taxes. However, people living in middle class neighbourhood, pay very little in taxes compared to the amount of money the corporation spends on them in setting up parks, street lighting facilities, regular garbage collection etc. Also as you read in this chapter, the property taxes collected by the Municipality makes up only 25-30 per cent of its money. Why do you think it is important that the Corporation should spend more money on slum localities? Why is it important that the Municipal Corporation provide the poor in the city with the same facilities that the rich get?
Answer:
The Corporation should spend of money on slum localities because:
(i) The share of general public in corporations earning stand between 70-75 per cent in terms of collection of various axes excluding only property tax.
(ii) Sanitation and light fall in the category of basic needs mandatory to provide by corporation like authority in a city.
(iii) These effects part of corporation would in long terms, bring buoyancy to its earning through taxes when parks, schools, water and electricity etc. facilities are provided with the poor in slums. Again it would inspire them to prepare for better in future.

Question 1.
What is a Ward?
Answer:
Ward is a division of city for the purpose of municipal or corporation election.

Question 2.
What is a property tax?
Answer:
People who own homes pay proper tax. The larger the house the more the tax.

Question 3.
What is a Metropolitan city?
Answer:
A city in which people from different, religion, state and caste live together is called a metropolitan city.

Question 1.
What is sub-contracting? What did Yasmin Khala tell about this in case of garbage collection?
Answer:
Subcontracting means that the work that was earlier being done by government workers is how being done by a private company. Yasmin Khala told that in order to save money the Commissioners of several munici-palities across the country had hired private contractors to collect and process garbage.

Question 2.
What are hazards and dis-advantages associated with the job of collecting garbage?
Answer:
(i) The contract workers get paid less.
(ii) Their jobs are temporary.
(iii) It is quite a dangerous job.
(iv) The contract’ workers do not have any access to safety measures.
(v) They are not taken care of if they are injured while working.

Question 4.
How are complicated decisions taken?
Answer:
Complicated decisions usually affect the entire city and therefore these decision are taken by groups of councillor who form committees to decide and debts issue. For example, if bus stands need to be improved or a crowded market place needs to have its garbage cleared more regularly.

Question 2.
What are the main functions performed by the Municipality or Municipal Corporation?
Answer:
The functions of the Municipality or a Municipal Corporation are generally similar. These are.
1. Functions for maintaining public health:
(i) They arrange for the disposal wastes causes numerous diseases.
(ii) They construct sewage, drain out dirty water from our cities and villages.
(iii) They protect the people from epidemics and other diseases like small-pox, cholera. They make suffice arrangements for vaccination and inoculation of the people.
(iv) They construct public latrines and urinals.
(v) They maintain dispensaries and hospitals to treat the sick.

2. Functions of Public Convenience:
(i) They arrange for water and electricity.
(ii) They maintain and repair roads, bridges and streets.
(iii) They plant trees along the roads for the convenience of travellers.
(iv) They make arrangements for the primary education of the children. For this, schools are maintained with proper basic facilities.
(v) They also manage libraries, museums and zoological parks etc.
(vi) It makes arrangements for playgrounds, parks and gardens.

3. Maintaining optional or miscellaneous departments:
(i) It maintains fire engines for extinguishing fire.
(ii) It checks food adulteration.
(iii) They remove obstacles from the public roads.
(iv) They maintain records of births and deaths.
(iv) It approves the plans of houses to be built in its areas.
(vi) They make arrangement for cremation and burial grounds.
(vii) Corporation issue permission to set-up petrol pumps, cinema houses etc.
(viii) Corporation also set-up homes for helpless women and children.