(b) India shares its land, boundaries with seven countries. Name them.
Answer:

Question 2.
Tick the correct answers:
(a) The southernmost Himalayas are known as:
(i) Shiwaliks
(ii) Himadri
(iii) Himachal
Answer:
(i) Shiwaliks

Question 3.
Fill in the blanks:

On the outline map of India, mark the following:
(a) Tropic of Cancer
(b) Standard Meridian of India
(c) State in which you live
(d) Andaman Islands and Lakshadweep Islands
(e) Western Ghats and Eastern Ghats.
Answer: 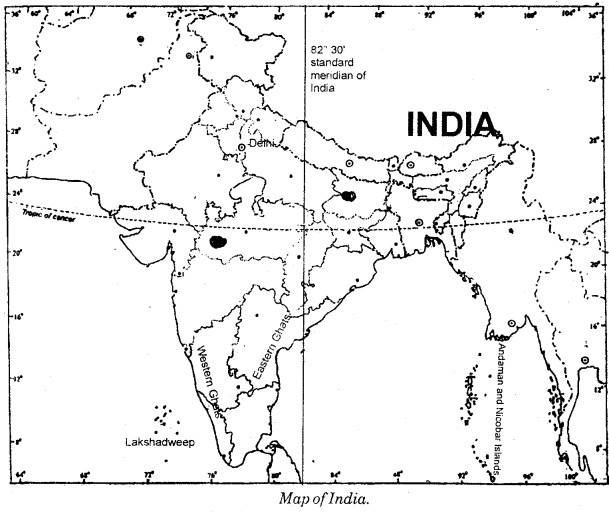 Question 2.
Describe the political and administrative divisions of India.
Answer:

Question 1.
How does the east-west extent of India affect time?
Answer:
The west to east extent leads to difference in local time from meridian to meridian. The local time changes by four minutes for every degree of longitude. The sun rises two hours earlier in the east, ie, Arunachal Pradesh than in the west, i.e., Gujarat. The local time of longitude of 82°30’E has been taken as the Indian Standard Time. This longitude is also known as the Standard Meridian of India. Its time is taken as the standard throughout the country.

(B) The Northern Indian Plains : They are formed by the alluvial deposits laid down by the rivers – the Indus, the Ganga, the Brahmaputra and their distributaries. These plains provide fertile land for cultivation.

(D) The Peninsular Plateau: The Peninsular plateau lies to the south of northern plains. It is triangular in shape. This is a region with numerous hill ranges and valleys.