Question 3.
Match the organisms in Column I with their action in Column II.

Question 8.
Write a short paragraph on the harms caused by microorganisms.
Answer:
Microorganisms can prove very harmful to us, as they cause a number of human and animal diseases. Diseases in humans like common cold, tuberculosis, measles, chiken pox, Polio, Cholera, Typhoid, Hepatitis B, Malaria, etc. are caused by microorganisms. Some serious deseases like Anthrax is also caused in animals by the microbes. Microbes grow on food products and render them unfit for consumption.

Question 9.
What are antibiotics? What precautions must be taken while taking antibiotics?
Answer:
Medicines taken to kill or stop the growth of harmful or disease causing microbes in human body are called antibiotics. Antibiotics are very useful as only antibiotics can save us from many microbial infections and diseases. Antibiotics are made from fungi and bacteria. Alexander Fleming discovered the first antibiotic called Penicillin in 1929. Now-a-days a number of antibiotics are used to cure a variety of human and animal diseases. Streptomycin, Tetracycline, Erythromycin etc. are some commonly used antibiotics.

1. Pull out a gram or bean plant from the field. Observe its roots. You will find round structures called root nodules on the roots. Draw a diagram of the root and show the root nodules.
Answer:
Do it yourself. 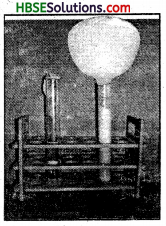 Take two test tubes and mark them A and B. Champ these tubes in a stand and fill them with water leaving some space at the top. Put two spoonfuls of sugar in each of the test tubes. Add a spoonful of yeast to test tube B. Inflate the two balloons incompletely Now tie the balloons on the mouths of each test tube. Keep them in a warm place, away from sunlight. Watch the setup every day for next 3-4 days. Record you observations and think of an explanation.

Question 2.
Where are microorganisms found?
Answer:
Microorganisms are found everywhere. In air, water and in the body of other organisms.

Question 3.
Name the groups in which microorganisms can be divided.
Answer:
Bacteria, fungi, protozoa, some algae and viruses.

Question 4.
Which common diseases do viruses cause?
Answer:
Viruses cause diseases like common cold, flu and most of the coughs.

Question 5.
Which serious diseases are caused by viruses?
Answer:
Diseases like polio and chicken pox.

Question 12.
Which bacteria is responsible for the curdling of milk?
Answer:
Lactobacillus.

Question 13.
Which bacteria is used to produce alcohol?
Answer:
Yeast.

Question 14.
What do you mean by fermentation?
Answer:
Conversion of sugar into alcohol using yeast is palled fermentation.

Question 15.
Who discovered the process of fermentation?
Answer:
Louis Pasteur.

Question 16.
What are antibiotics?
Answer:
Medicines used to kill or stop the growth of diseases causing microorganisms inside human body are called antibiotics.

Question 19.
Which microorganism is not affected by antibiotics?
Answer:
Viruses.

Question 25.
Name an insect which is a common carrier of microbial diseases.
Answer:
Housefly.

Question 2.
Describe various types of bacteria with examples.
Answer:
On the basis of their shape, the bacteria are divided into three types:
(i) Bacillus or rod shaped: Long rod shaped bacteria like Bacillus, Pseudomonas, Lactobacillus.
(ii) Cocus or round shaped: Streptococus, Sarcinaltc. are round shaped bacteria.
(iii) Spirillum or spiral: Comma shaped bacteria, they can also be spiral rods e.g. Camphilovector, Triponema.

Question 3.
State some beneficial effects of bacteria.
Answer:
Bacteria are very useful to us. Some of the beneficial effects of bacteria are as follows:
(i) Bacteria is helpful in agriculture as it fixes the atmospheric nitrogen in soil.
(ii) Products like vinegar, alcohol, curd etc. are obtained.
(iii) It decomposes the dead bodies of plants and animals.
(iv) Valuable medicines like antibiotics are obtained by bacteria.

Question 4.
Mention important uses of fungi,
Answer:
(i) Some fungi are eaten raw as food such as mushrooms.
(ii) Yeast being rich in amino acids and proteins are an important source of food for man and his farm animals.
(iii) Yeast is also used in the preparation of products like wine and bears from fruit juices or barley. It brings about fermentation of sugars into alcohols and carbondioxide.

Question 5.
Write the harmful effects of Bacteria.
Answer:
Bacteria cause a number of diseases in humans and animals. Diseases like cholera, pneumonia, tuberculosis are caused by bacteria. It also causes food poisoning as it makes the food unfit to consume. It spoils leather and clothings.

Question 6.
Write the harmful effects of fungi and algae.
Answer:
Some fungi causes damages or diseases. Smuts and rusts are fungi that damage the crops. Ring-warm and atheletes food diseases are caused by fungi. Amanite mushrooms contain poisonous substance. Algae are great nuisance as they spoil the drinking water. Excess growth of algae also blocks the movement of water in channels.

Question 8.
Describe the main characteristics of viruses in brief.
Answer:
(i) They do not possess any cell wall or cell membrane.
(ii) They can only multiply in the bodies of living beings.
(iii) They cause many diseases.
(iv) Antibiotics do not have any affect on viruses.

Question 9.
What are vaccines?
Answer:
A vaccine consists of antigens of mild strains of pathogens of a particular disease. Vaccine when injected into the blood stream stimulates white blood cells to produce antibodies. These antibodies act against the antigens and neutralise their toxins or destroy them.

Question 11.
What are viruses?
Answer:
Viruses are microscopic organisms. These are the smallest organisms. They may be rod-shaped, polygonal, spherical or even cubical. There are four types of viruses: Plant viruses, Insect viruses, Bacterial viruses and mammalian viruses.

Question 1.
What do you understand by microorganisms? Describe their different forms.
Answer:
Different living organisms present around us which cannot be seen with naked eyes are called microorganisms. They are present in soil, water and air. Microorganisms can be divided into five groups:
(i) Bacteria are the non-green single celled microscopic organisms. They have a rigid cell wall. It has a nuclear material. They are the simple most common form of life on earth. They have different shapes and sizes.

(ii) Algae are aquatic, photosynthetic organisms. In simple terms they are called sea weeds. They range in size, colour. Algae are of green, blue, red and blue^green colours.

(iii) Fungi are plants not having chloroplast but a cell wall. They are both unicellular and multicellular. Moulds, mushrooms etc. are fungi.

(iv) Protozoa are one celled living things. They range from 2 to 200 microns. Amoeba, Paramecium, Euglena and Plasmodium etc. are protozoas.

(v) Viruses are the non-cellular microbes. They are smaller than bacteria and multiply only inside a living cell.

Question 2.
Write a short note on Bacteria.
Answer:Bacteria are non-green single celled microscopic organisms. They have a rigid cell wall. They have a nuclear material. They are simple most common form of life on earth. They occur singly but are seen in chain of cells. They are of different shapes such as rod shaped, spiral, cork screw and comma shaped. 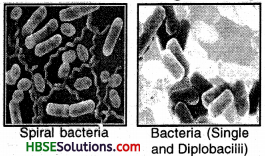 Bacteria are harmful for us, but some bacteria are quite useful. The most disadvantageous aspect of bacteria is their disease causing tendency. Various serious diseases like Tuberculosis, cholera, typhoid etc. are caused by bacteria. Bacteria are useftd as they are used to prepare vaccines and antibiotics. They decompose waste material and fix the atmospheric nitrogen into soil to enhance its fertility. Bacteria are also used to manufacture vinegar, acetic-acid, curd and cheese etc.

Question 3.
What are fungi? How are they useful or harmful to us?
Answer:
Fungi are microorganisms which exist in unicellular as well as multicellular forms. Some of the fungus like mushroom, yeast etc. can be seen with naked eyes. They have long thread like structures called hyphae. Fungus can reproduce sexually as well as asexually. Fungi are both harmful and useful. Smuts, crusts and ringworm etc. cause many diseases in humans as well as in animals and plants.

They are useful as they are used as food in many parts of world. Mushrooms are the mostly used food around the word. Yeast is used to make alcohol, breads, bhathuras, idlis, dosas etc. Penicillium is used to make penicillin an antibiotics.

Question 4.
What do you know about Protozoa?
Answer:
Protozoa are single celled living things. The size ranges from 2 microns to 200 microns. 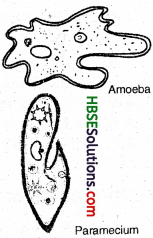 Amoeba, Paramesium, Euglena, Plasmodium etc. are examples of Protozoa. Protozoa are the part of animal kingdom because they do not have chlorophyll.

They are oval, elongated and spherical in shape. Protozoa cause diseases like malaria and dengue. Protozoa like Entamoeba Histolytica causes amoebic dysentery in man. Trypanosoma causes sleeping sickness in man and cattle. Protozoa are useful as they form an important link in acquatic food chain. They decompose organic matters to convert them in useful soil nutrients.

Sugar preserves jam, jellies, squashes and other sweet drinks. Sugar reduces the moisture and checks the growth of microorganisms.

Oil: Edible oils are used as preservatives in vegetables and pickles. Oil does not allow the moisture to surface thus preventing the growth of harmful bacteria.

Vinegar preserves vegetables, fruits, fish, meat and pickles.
Other processes like pasteurization etc. also preserve the milk and other liquids. 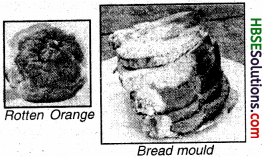 (b) Discoluration:
Growth of microbes on food results in discolouration of food black. Moulds on breads, blue green moulds on citrus fruits and cheese cause the change in the original colour of the food. Any small discolouration indicates that the food has been spoiled and is unfit for consumption.

(c) Souring:
Sometimes the cooked food starts tasting sour. It is due to the production of acids by the action of certain bacteria. Milk starts tasting sour if not preserved properly, same is the case with curries and gravies of some vegetables.

(d) Sliminess:
Sometimes the food became slimy. It is also due to action of certain bacteria thread like slimes are also caused due to moulds.

(e) Gas formation:
Due to action of bacteria gases like carbondioxide are produced. They also spoil the food by making it swell or become spongy.