Question 1.
Answer the following questions briefly :
(a) What are the two types of deserts found in the world?
(b) In which continent is the Sahara desert located?
(c) What are the climatic conditions of the Ladakh desert?
(d) What mainly attracts tourists to Ladakh?
(e) What type of clothes the people of the Sahara desert wear?
(f) Name the trees that grow in Ladakh.
Answer:
(a) (i) Hot Deserts
(ii) Cold deserts.

(c) The climatic conditions of the Ladakh desert are cold and dry.

Question 2.
Tick the correct answer:
(i) Sahara is located in which part of Africa?
(a) eastern
(b) northern
(c) western
Answer:
(b) northern

Question 5.
Map skills :
(i) On the outline map of Africa, mark the Sahara Desert.
Answer: 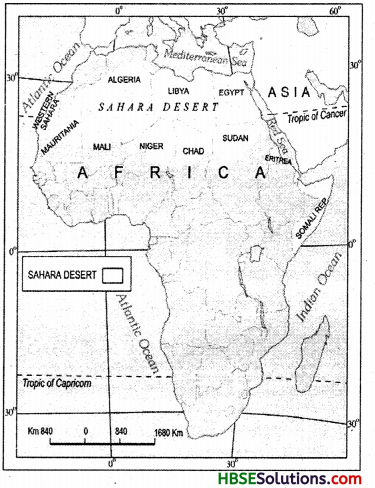 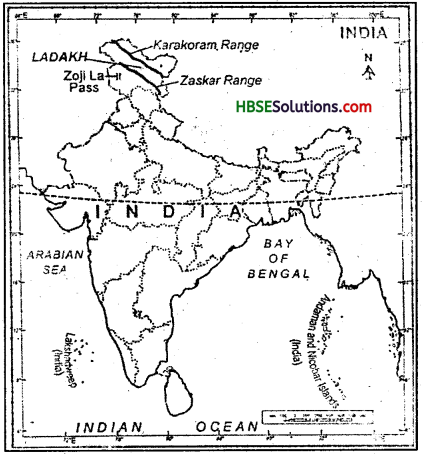 Question 1.
In which continent does the Sahara Desert lie?
Answer:
North Africa.

Question 2.
Define Desert?
Answer:
It is an arid region characterized by extremely high or low temperature and has scarce vegetation.

Question 4.
What is the area of the world’s largest desert?
(Hint : World’s largest Desert is the Sahara Desert.)
Answer:
8.54 million sQuestion km.

Question 6.
What is the etymology of Ladakh?
Answer:
La – Meaning a maintain pass
Dak – meaning country.

Question 7.
Which is one of the coldest inhabited place on earth.
Answer:
Brass.

Question 2.
Describe the location of Ladakh.
Answer:
Ladakh lies in the Great Himalayas, on the eastern side of Jammu and Kashmir. The Karakoram range in the north and the Zaskar mountain in the south bound it.

Question 3.
Write a short note on the people living in the Sahara Desert?
Answer:

Question 4.
What are changes undergoing in the cultural landscape of the Sahara?
Answer:
(a) Gleaming glass cased office buildings tower over mosques and super highways criss-cross the ancient camel paths.
(b) Trucks are replacing camels in the salt trade.
(c) Tuaregs are seen acting as guides to the foreign tourists. More and more nomadic herdsmen are taking to city life finding jobs in gas and oil operation.

Question 5.
Determine the location of Ladakh with the help of physical features.
Answer:
Ladakh is a cold desert lying in the Great Himalayas (mountains) on the eastern side of Jammu and Kashmir. The Karakoram range in the north and the Zanskr range in the south enclose it. Several rivers especially Indus flow through it.

Question 2.
Contrast the desert of Ladakh and Sahara.
Answer: