Question 1.
In what ways does the media play an important role in democracy?
Answer:
Media plays an important role in democracy in the following ways:
(a) On the basis of media’s information citizens can learn how the government works.
(b) Public becomes aware of the fraudulent practices and the corruption is curbed.
(c) Media helps in forming opinion of the masses.
(d) The media also announces the opinion of the public about certain issues, problems.

Question 2.
Can you give this diagram a title? What do you understand about the link between media and big business from this diagram? 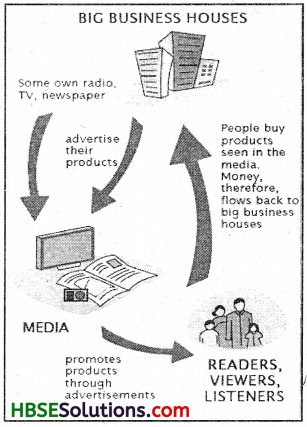 Question 3.
You have read about the ways in which media, sets the agenda. What kind of effect does this have in a democracy? Provide two examples in support of your view.
Answer:
Media ‘sets agenda’ because media has its great importance of its own. It is the media through which the public can raise voices. Media decides which subjects to highlight and hence ‘sets the agenda’.
For example:
(i) News of major public events is highlighted.
(ii) The visit of a famous political party is highlighted.
(iii) Alarming level of adulterations in food items is highlighted.

Question 4.
As a class project, decide to focus on a particular news topic and cut out stories from different newspapers on this.-Also watch the coverage of this topic on TV news. Compare two newspapers and write down the similarity and differences in their reports. It might help to ask the following questions:
(a) What information is this article providing?
(b) What information is it leaving out?
(c) From whose point of view is the article being written?
(d) Whose point of view is being left and why?
Answer:
I. Hindustan Times

New Delhi:
Jubilant Food Works, which operates the Domino’s Pizza chain and Dunkin’ Donuts in India, on Thursday said India is Domino’s fourth-biggest overseas market, after the US, UK and Mexico.

The chain, which sells 70% of all India’s home- delivery pizzas and has 55% share of the organised pizza markets, is betting on products that cater to Indian tastes to continue its aggressive growth. “There are a number of tweaked products in the pipeline to woo the taste buds of the Indian consumer. Our aim is to continue innovation at reasonable price points,” said Richard Allison, executive vice¬president, Bomino’s Pizza International. (a) This article provides information that India is the fourth largest market of Dominos-after the US, UK and Mexico.
(b) It is leaving out information on what other products Dominos want to introduce in India.
(c) The article is being written from the point of view of those who want to enter new business venture with Dominos and the consumers.
(d) The point of view of the workers at Dominos is left out.
This is so because it is market-oriented.

New Delhi:
Despite a palpable slowdown in the eating out industry across the globe, India has emerged as the fastest growing market for Domino’s outpacing US, which is the largest market for the pizza chain major across 73 countries where it has presence. India recorded an annual growth rate of nearly 50% for Domino’s for the fifth consecutive year.

“India has been performing fabulously for us. We are seeing some pressure in western Europe especially, where it has been a very tough economic year for us,” Domino’s executive vice-president (international) Richard E Allison Jr said. India, which accounts for 5% of Domino’s global sales, is among the top five markets for the US based company. In terms of store counts too, India has registered the highest growth among all other markets.

The brand added 75 stores in India in calendar year 2011 taking the total number to 500. It is planning to increase the number by 100 in the current financial year. The company, which currently competes with other food chains such as Pizza Hut and Papa John’s, commands around 55% share of the Rs. 1,800 crore pizza industry in the country.

With only 10-15% of the industry organized, Allison is optimistic on increasing its market share by increased accessibility to consumers. The company will invest over Rs. 150 crore in India this financial year, up from the Rs. Ill crore it had invested last year. Like most other companies in the quick service restaurant space, Domino’s too reported a decline in the same stores sales growth in the April to June quarter to 22.3% from 36.7% in the corresponding period last year.

With consumer spending getting more discretionary, the brand has pushed price hikes, which normally happen in the first quarter, to the second quarter of the current fiscal year. Question 1.
Look at the collage and list the six kinds of media that you see
Answer:
• Radio
• Television
• DVD
• Computer and Internet
• Newspapers, magazines
• Periodicals

Question 2.
Ask older members of your family about what they used to listen to on the radio when there was no TV around. Find out from them when the first TV came to your area. When was cable TV introduced?
Answer:
• Older members of our family used to listen to news on radio and old Hindi songs.
• The first TV came to our area in 1962.
• Cable TV was introduced in 1984.

Question 3.
How many people in your neighbourhood use the internet?
Answer:
Many people.

Question 4.
List three things that you know about some other part of the world from watching television.
Answer:
•International Cricket matches.
• Fashion-shows
• Disasters-Natural or Man-made.

Question 7.
Are the above stories in the two newspapers given above similar? And if not, why not? What, in your view, are the similarities and differences?
Answer:
Both the news relate to the closure of factories in the residential areas. However, the News of India reports about the nuisance created by the protesters. It is reported that they disrupt traffic and continuously pollute the city. The Indian Daily reports about the plight of lot of workers who lose jilieir livelihoods because of closure “of factories.

Question 8.
If you read the story in the News of India, what would you think about the issue?
Answer:
The government’s decision about closure of factories is apt because it would reduce the pollution. The angry owners and workers protest the decision and cause unrest.

Question 10.
What is the consequence of the Media, “setting the agenda by reporting on the fashion week rather than the slum demolitions?”
Answer:
By report on the fashion week, the media will attract more readers and they will earn more money.

Question 11.
Can you think of an issue that does not seem important to you because it is never featured in the media?
Answer:
Inflationary prices of essential commodities.

Question 1.
What is media?
Answer:
All means of communication are collectively referred to as media.

Question 3.
What is censorship?
Answer:
When the government prevents media from making a news or programme or their parts public it is called censorship.

Question 3.
How can the credibility of the media be maintained?
Answer:
The credibility of media can be maintained if. media does not resort to unethical means for raising its circulation. Media should not try to make money through a sting operation. The media should also not conduct trials and pronounce people guilty or innocent since it is not their job.

Question 1.
What is the role of TV in our lives?
Answer:
(i) At present we can not imagine our lives without TV. It has made us the members of the world community.
(ii) It allows us to view news and entertainment channels across the world through satellites and cables.
(iii) We can see live telecast of any event, natural calamities, etc., happening in one corner while sitting in other corner of the world.
Thus, the TV has changed the world into a small village.