Question 1.
Fill in the blanks:

He was powerful because :

Question 3.
List the crafts person who would have been present in both villages and cities.
Answer:
Carpenters, weavers, potters, black-smiths, goldsmiths etc.

Question 5.
Which of the iron tool shown on page 87 your NCERT Text Book would have been important for agriculture? What would the other tools have been used for? 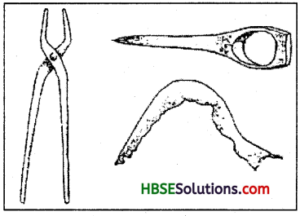 Answer:
Ploughshares would have been important for agriculture. The other tools used were sickles and axes. The other tools like tongs, nails and hammers were used for carpentry and also by ironsmiths.

Question 6.
Compare the drainage system in your locality with that of the cities mentioned in the lesson.
Answer:
Similarities:

Differences:
Today drainage system has been systematically planned as compared to ancient times.

Question 7.
If you have seen crafts persons at work, describe what they do in a short paragraph. (Hint : how do they get the raw materials, what kind of equipment do they use, how do they work, what happens to the finished products)
Answer:

Question 8.
List the functions performed by men and women who live in your city or village. In what ways are these similar to those performed by the people who lived in Mathura? In what ways are they different?
Answer:
Similarities : The people in Mathura worked as goldsmiths, blacksmiths, weavers, basket makers, garland makers, perfumers. In present times, people in cities are goldsmiths and others are present in the villages.

Differences: In present times, we can find people who work in offices, banks, schools, colleges, etc., but they were not present in those days.

Question 1.
What were the Jataka tales?
Answer:
Jataka tales were the stories that were probably composed by ordinary people and then written down and preserved by Buddhist monks.

Question 2.
Why do the kings demand taxes from farmers or revenues? How does it also benefit the farmers?
Answer:
The kings demand taxes as they need money for armies, palaces and forts. Since for increasing production. The king provides money and plans irrigation works and also the labour is provided by people, the probability of quality production increases.

Question 4.
Who were grihapatis?
Answer:
Grihapatis were independent farmers with smaller lands.

Question 5.
Who were dasa Karamkaras?
Answer:
Dasa karamkaras were people who did not own land and had to earn a living working on the field owned by others.

Question 6.
What are punch marked coins?
Answer:
Punch marked coins have been given this name because the designs were punched on to the metal-silver or copper. Archaeologists have found thousands of these coins. They were in use about 500 years back.

Question 2.
What are ring wells and their functions?
Answer:
In many cities, archaeologists have found rows of pots or ceramic rings arranged one top of the other. These are known as ring wells. They function as :

Question 3.
Why can’t much be explored about common people’s lives?
Answer:

Question 4.
How do travellers play an important role in finding about cities?
Answer:

Question 5.
Give reason :
(a) Mathura emerged and has been an important settlement for more than 2500 years.
OR
How can we say that Mathura is multi-functional town?
Answer:
It was important because it was located at the cross roads of two major routes of travel and trade – from the northwest to the east and from north to south. There were fortifications around the city, and several shines. Farmers and herders from adjoining areas provided food for people in the city. Mathura was also a centre where some extremely fine sculpture was produced.

Question 7.
What archaeological evidences give us insights into the town of Mathura?
Answer:
Several inscriptions on surface such as stone slabs and statues have been found in Mathura. Generally, these are short inscriptions, recording gifts made by men (and sometimes women) to monasteries and shrines. These were made by kings and queens, officers, merchants and crafts persons who lived in the city. For instance, inscriptions from Mathura mention goldsmiths, blacksmiths, weavers, basket ; markers, garland makers, perfumers.

Question 8.
Besides the use of coins, what were the other methods to buy and sell goods? How do we know about it?
Answer:
The merchants exchanged their goods , with the goods of other merchants. We come to know about this method of exchange from a poem in the Sangam literature. The poem mentions the exchange of paddy and salt.

Question 9.
What were shrenis? How did they function?
Answer:
Many craftspersons and merchants formed associations known as shrenis. They provided training, procured raw material and distributed the finished goods. The shrenis of the merchants organised the trade. Shrenis also served as banks, where rich men and women deposited money. This was invested and part of the interest was returned or used to support religious institutions and monasteries.

Question 1.
What are shrenis? What are its functions many craftspersons and merchants now formed associations known as Shrenis.
Answer:

This was invested and part of the interest was returned or used to support religious institutions such as monastries.

Question 2.
What are the findings in Arikamedu?
OR
Write a short note on Arikamedu.
Answer:
Arikamedu was a coastal settlement where ships unloaded goods from distant lands. A massive brick structure, which may have been a warehouse, was found at the site. Other finds include pottery from the Mediterranean region, such as amphorae (tall double-handled jars contained liquids such as wine or oil) and stamped red-glazed pottery, known as Arretine Ware, which was named after a city in Italy. This was made by pressing wet clay into a stamped mould. There was yet another kind of pottery which was made locally, though Roman designs were used. Roman lamps, glassware and gems have also been found at the site. Small tanks have been found that were probably dyeing vats, used to dye cloth. There is plenty of evidence for the making of beads from semi-precious stones and glass.

The two things that were not in use during Harappan times were wine and coral.