Question 2.
Look at the wordings of two documents given on next page. The first document is from the 1990 Nepal constitution. The second column is from the more recent interim constitution of Nepal.

What is the difference in who exercise ‘Executive Power’ in the above two constitutions of Nepal. Keeping this in mind, why do you think Nepal needs a new constitution today?
Answer:
According to constitution of Nepal 1990, the executive power is vested solely in the hands of king. He could exercise his powers as desired. On the other hand according to Interim Constitution of 2007, Executive power will be vested in the council of ministers. It means the Parliamentary democracy will function in Nepal.

Question 4.
In each of the following situations, identify the minority. Write one reason why you think it is important to respect the views of the minority in each of these situations.
(a) In a school with 30 teachers, 20 of them are male.
(b) In a city 5 percent of the population are Buddhists.
(c) In a factory mess for all employees, 80 percent are vegetarians.
(d) In a class of 50 students, 40 belong to more well-off families.
Answer:
(a) Minority are the females. It is important to respect the view of minority (females) because they are equally qualified to males and equally contributing to run the institution.

(b) Minority are the Buddhists. It is important to respect their views because every religious group has the right to preserve and develop their own culture.

(c) Minority are the non-vegetarians. It is important to respect their views because everyone has the right to have their own food habits br taste.

(d) Minority are the students who belong to average or poor families. It is important to respect the views of minority because being students of the same class, their ideas cannot be ignored. By ignoring their ideas there may develop inferiority complex among the minorities which would influence their performance in the class.

Question 5.
The column on the left lists some of the key features of the Indian constitution. In the other column write two sentences in your own words, on why you think this feature is important.

Answer:
1. Federalism:
India is a large country divided into states. It is not possible to run the whole country from the centre (national capital). To run our country efficiently, we have government at the state level and Panchayati Raj at the village level.
2. Separation of Powers: To prevent the misuse of power by the legislature, executive and the judiciary.
3. Fundamental Rights: These rights protect citizens against the arbitrary and absolte exercise of power by the state.
4. Parliamentary Form of Government: People of India have a direct role in electing then- representatives.

Question 6.
Colour in the following countries in this map:
(а) Colour India in red.
(b) Colour Nepal in green.
(c) Colour Bangladesh in yellow. 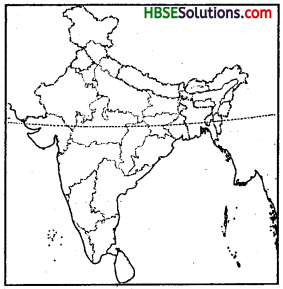 Question 1.
What is a constitution?
Answer:
A constitution is a set of rules, laws or principles according to which a country is governed.

Question 2.
What is Preamble?
Answer:
The Preamble is an introductory document which explains the goals of the government. It states the aims and objectives of the constitution.

Question 3.
Define Socialism.
Answer:
Socialism is that everyone must enjoy social and economic equality. Everyone must have equal status and opportunities. Everyone must also enjoy equitable distribution of wealth and a decent standard of living for all.

Question 1.
What are Directive Principles of State Policy? Why were they added to the constitution?
Answer:
The Directive Principles of State Policy are the guidelines that are given to the government to ensure the welfare to the people. They are contained in Part IV of our constitution. They were added in our constitution:
(a) to ensure greater social and economic reform.
(b) to serve as a guide to the independent Indian State
(c) to institute laws and policies that help reduce the poverty of the masses.

Question 2.
How is a ‘state’ different from a ‘government’?
Answer:
By ‘Government’ we mean a body which is responsible for administering and enforcing laws. The government can change with elections.
The state on the other hand refers to a political institution that represents sovereign people who occupy a definite territory. For example, we can say, the Indian State, the Nepalese State etc.

Question 3.
Which Fundamental Rights will the following situations violate?
(a) If a 13-year old child is working in a factory manufacturing carpets.
(b) If a politician in one state decides to not allow labourers from other states to work in his state.
(c) If a group of people are not given permission to open a Telugu-medium school in Kerala.
(d) If the government decides not to promote an officer of the armed forces because she is a woman.
Answer:
(a) Right against exploitation.
(b) Right to freedom.
(c) Cultural and Educational Rights.
(d) Right to Equality.

Question 4.
All persons are equal before the law. Which fundamental right states this? What does this mean?
Answer:
This is given under Right to Equality. This means that all persons shall be equally protected by the laws of the country. It also states that no citizen can be discriminated against on the basis of their religion, caste or sex. Every person has access to all public places including playgrounds, hotels, shops etc. The state cannot discriminate against anyone in matters of employment.

Question 6.
Is India a Welfare State? Explain.
Answer:
A state is called welfare state where Government does a lot of work for the welfare of citizens. Too much importance is given to the Directive Principles of the State Policy and Fundamental Rights of the citizens. Fundamental Duties are also shown alongwith the Fundamental Rights so that welfare programmes can be continued. Stress is given on the welfare of the backward and tribal people in this way.

Question 7.
What is the difference between the fundamental rights and the directive principles?
Answer:

Question 1.
Describe the main features of the Indian Constitution as stated in Preamble of the constitution.
Answer:
The main features of the Indian Constitution are as follows:
(a) Preamble: Our constitution begins with a preface or introduction called the preamble. It highlights the goals and aspirations of the Indian people.
(b) Sovereign State: Sovereign means that India is now independent, it is no longer governed by any external authority and is its own master.
(c) Socialist: Everyone is given equal opportunities to make use of resources of the country.
(d) Secular: All religions are treated equally. There is no official religion.
(e) Democratic: The people of India choose their elected representatives through elections which are conducted at regular intervals.
(f) Republic: The Indian constitution proclaims that the head of the state will be elected, and not be a hereditary ruler.
(g) Justice: The Indian constitution strives to ensure an equitable and just society by reducing economic and social inequalities.
(h) Liberty: The constitution gives the citizens the freedom to express their opinion, follow their own path and also choose the occupation of their choice.
(i) Equality: All citizens are equal before the law.
(j) Fraternity: Indian State will observe a sense of fraternity or brotherhood to preserve the unity and oneness of India.

(ii) Right to Freedom is the essence of human existence. The Indian constitution provides to every citizen the right to freedom of speech, peaceful associations, movement and residence in any part of Indian territory.

(iii) Right against Exploitation: All religions in India have equal respect. Religion and politics are two different aspects.

(iv) Right to Freedom of Religion: India is a country of many religions. All religions have equal respect and religion and politics are different aspects.

(v) Cultural and Educational Rights: The Constitution states that all minorities, religions or linguistic, can setup their own educational institutions in order to preserve and develop their own culture.

(vi) Right to Constitutional Remedies: This right allows a citizen to move to court if they believe that any of their above Fundamental rights have been violated by the state.

Question 3.
Explain the provisions made in the Indian Constitution for improving the condition of the Scheduled Castes and the Scheduled Tribes.
Answer:
The Constitution of free India, which came into force from the 26th January, 1950, guaranteed some provisions for the welfare, security and development of Scheduled Castes and the Scheduled Tribes. The main provisions are given below:
(i) The Constitution ends discrimination on the basis of caste, religion, race or sex. It gives the right of entry and use of every place like shops, hotels, roads, wells and places of entertainment to every Indian without any discrimination.

(ii) The Constitution abolished untouch-ability in any form. Practice or preaching of untouchability is a punishable offence (Article 17).

(iii) The Constitution provides protection to the Scheduled Castes and the Scheduled Tribes from any type of social and economic exploitation
(Article 46).

I. Look at the given picture and answer the following questions.