Question 1.
List conditions under which combustion can take place.
Answer:
Following conditions are necessary for combustion:
(i) The substance should be combustible.
(ii) It should have low ignition temperature.
(iii) There should be proper supply of air.

Question 3.
Explain how the use of CNG in automobiles has reduced pollution in our cities.
Answer:
CNG has replaced petrol and diesel as fuel in automobiles because petrol and diesel produced a lot of unbumt carbon particles and emitted carbondioxide and nitrogen oxides and sulphur dioxide. These all gases are poisonous gases and cause various environmental hazards. But CNG is safe because it produces these substances in very small amounts thus reducing pollution in cities.

Question 6.
Make a labelled diagram of a candle flame.
Answer: 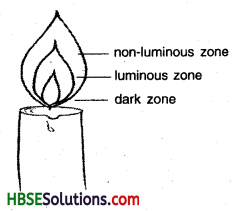 Observe the foaming reaction. What happens to the candles? Why? In what order?

Question 1.
Why do we need fuel?
Answer:
We need fuel to generate energy.

Question 3.
What is produced during combustion?
Answer:
Heat and light.

Question 4.
In what forms light is given during combustion?
Answer:
In form of flame or glow.

Question 5.
How does charcoal burn?
Answer:
It burns with glow.

Question 6.
How does a candle burn?
Answer:
It burns with flame.

Question 10.
What is necessary for substances to burn?
Answer:
Air.

Question 12.
In addition to air, what else is a necessary condition for a substance to burn?
Answer:
Low ignition temperature.

Question 16.
What should we use to extinguish fire in case of electric short circuit?
Answer:
Sand or soil.

Question 20.
Which zone of a flame has highest temperature?
Answer:
Non-luminous zone.

Question 22.
Is there any ideal fuel?
Answer:
No ideal fuel exist.

Question 23.
What is smoke?
Answer:
Smoke is unburnt carbon particles.

Question 24.
Which diseases do incomplete combustion cause?
Answer:
Respiratory and skin diseases.

Question 25.
What is supposed to be the cause of global warming?
Answer:
Increasing amount of carbon dioxide.

Question 26.
What is the rise in temperature of the environment of earth called?
Answer:
Global warming.

Question 29.
Which fuel is being used in automobiles in place of petrol and diesel?
Answer:
CNG.

Question 7.
What can be done to put the fire off?
Answer:
To put off the fire one of the conditions necessary for burning should be removed or controlled. If we cut off the supply of air, fire will be extinguished or we can bring the ignition temperature down to blow off the fire.

Question 9.
What should be done to control fire due to oils?
Answer:
In case of fire due to oils, water is not useful as it is lighter than oil and settles down below the oil particles. In such cases, sand or soil should be used. They cut off the supply of air to the fire and it is put off.

Question 10.
How does carbondioxide help in putting off fire?
Answer:
Carbondioxide covers the surface of the burning substance and does not allow the oxygen to reach the substance. In absence of oxygen the fire gets put off.

Question 11.
What is rapid combustion?
Answer:
When gases bum quickly to produce heat and light it is called rapid combustion. This process takes place rapidly and takes less time.

Question 13.
Write the properties of an ideal fuel.
Answer:
An ideal fuel has following qualities:
(i) It has high calorific value.
(ii) It has low ignition temperature.
(iii) It is cheap and easily available.
(iv) It can be easily transported.

Question 14.
Write some harmful effects of burning fuel.
Answer:
Burning fuel can cause following ill effects:
(i) Unbumt carbon particles of these fuels can cause respiratory and skin diseases.
(ii) Smoke emitted by these fuels cause pollution and many diseases.
(iii) Poisonous gases like carbondioxide, carbonmonoxide and sulphurdioxide etc. pollute the air.

Question 1.
Explain the conditions necessary for cpmbustion.
Answer:
Combustion is burning of substances. For combustion of substances following conditions are necessary: .
(i) Air:
Substances only bum in sufficient supply of air i.e. oxygen. If the supply of air is hindered the object will not bum. In case of a burning object, if air is hindered, it will stop burning. This fact is used in extinguishing the fires. 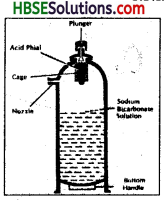 (iii) Explosion:
When combustion takes place with sudden release of heat and light and a large amount of gas in form of bang, it is called explosion as in case of crackers and bombs.

Question 4.
Explain various harmful effects of burning fuels.
Answer:
Fuels are very useful for us. But there are certain disadvantages of burning fuels.
(i) Fuels like wood, coal, petroleum etc. which are carbon fuels generally release unbumt carbon particles which are quite harmful. They cause various respiratory and skin diseases.

(iii) Incomplete combustion of fuels release many poisonous gases like carbonmonoxide. in the environment. These poisonous gases create air pollution, such air if inhaled can be fatal.

(iv) Combustion of coal and diesel generates sulphurdioxide. It is a corrosive gas and it causes suffocation.

(v) Burning of petrol releases nitrogen oxides. These oxides of nitrogen and sulphurdioxide combine with rain water to cause acid rains.

Question 5.
Describe the various zones of a candle flame.
Answer:
The candle flame has three different zones. These zones can be distinguished on the basis of their colour.
(i) The outer zone:
It is blue in colour and it has very high temperature. It is the hottest zone of the flame. In this zones the wax vapours bum completely due to availability of enough oxygen, in turn carbondioxide and water vapours are produced.

(iii) The inner zone:
This zone appears black in colour as no combustion of wax vapour take place in this zone due to no supply of oxygen in this zone. It is the coolest zone of the flame having unbumt wax vapour.

1. All substances which catch fire/bum in air are called combustible substances.
2. Wood, paper, petrol, L.P.G., charcoal etc. are some examples of combustible substances.
3. During combustion heat and light is emitted. The light is emitted in the form of flame.
4. All combustible substances do not burn with flame, for example coal does not bum with flame, while wood, paper, candle, L.P.G., etc. bum with a flame.
5. There are two main things required by a substance to become combustible. These are: low ignition temperature and air.
6. Ignition temperature is the lowest temperature at which a combustible substance can easily catch fire. Inflammable substances have very low ignition temperature.
7. If any of the above condition is removed,’fire can be extinguished. Either we bring ignition temperature below minimum or we cut off the supply of air.
8. Water, sand are mostly used to bring fire under control.
9. There are three main zones of a flame. The outermost zone has the highest temperature while the inner zone has unbumt carbon particles.
10. Fuel is a substance which is used to give energy and heat. Ideal fuel has low ignition temperature and readily available. It is cheap and has high calorific value. It is free from pollution.
11. But no fuel is an ideal fuel.
12. Fuels are not same in their efficiency and cost.
13. Calorific value of fuels is expressed in units of kilojouls per kg.
14. Combustion of an inflammable substance should be complete because incomplete combustion produce unburnt carbon particle which can cause serious environmental hazards like acid rain, global warming and poisonous gases causing dangerous diseases in living beings.
15. Global warming the most alarming environmental problem is being created due to increased amount of carbondioxide in air.
16. Acidic rain is caused due to the oxides of nitrogen and sulphur released in environment due to burning of coal, diesel and petrol.