Question 2.
Which of the following is not correct?
(i) The basic unit of time is second.
(ii) Every object moves with a constant speed.
(iii) Distance between two cities are measured in kilometres.
(iv) The time period of a given pendulum is not constant.
(v) The speed of a train is expressed in m/h.
Answer:
(ii), (iv) (v).

Question 6.
Salma takes 15 minutes from her house to reach her school on a bicycle. If the bicycle has a speed of 2 m/s. Calculate the distance between her house and’the school.
Answer:
Time taken = 15 min
Speed = 2 m/s.
Distance = Speed x time
= 15 x 2
= 30 m.
So, distance between Salma’s School and her house is 30 metre.

Question 7.
Show the shape of the distance-time graph for the motion in the following cases :
(i) A car moving with a constant speed.
(ii) A car parked on a side road.
Answer:

Question 12.
Fig. 13.16 shows the distance-time graph for the motion of two vehicles A and B. Which one of them is moving faster? 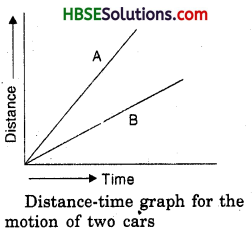 Answer:
‘A’ car is moving faster.

Question 13.
Which of the following distance-time graphs shows a truck moving with speed which is not constant? 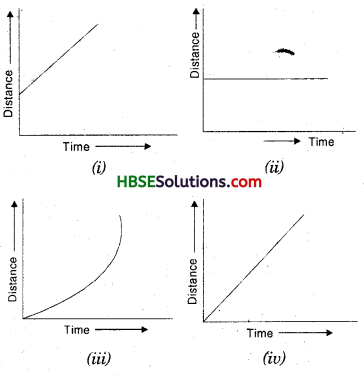 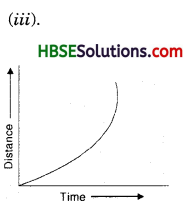 Question 1.
You can make your own sundial and use it to mark the time of the day at your place. First of all find the latitude of your city with the help of an atlas. Cut out a triangular piece of a cardboard such that its one angle is equal to the latitude of your place and the angle opposite to it is a right angle. Fix this piece, called gnomon, vertically along a diameter of a circular board a shown in Fig. 13.4. One way to fix the gnomon could be to make a groove along a diameter on the circular board.

Next, select an open space, which receives sunlight for most of the day, Mark a line on the ground along the North-South direction. Place the sundial in the sun as shown in Fig. 13.4 Mark the position of the tip of the shadow of the gnomon on the circular board as early in the day as possible, say 8:00 AM. Mark the position of the tip of the shadow every hour throughout the day. Draw lines to connect each point marked by you with the centre of the base of the gnomon as shown in Fig. 13.4. Extend the lines on the circular board up to its periphery. You can use „ this sundial to read the time of the day at your place. Remember that the gnomon should always be placed in the North- South direction as shown in Fig. 13.4. 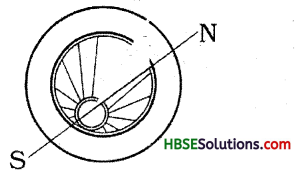 Answer:
Do it yourself.

Question 2.
Collect information about time-measuring devices that were used in the ancientitimes in different partrs of the world. Prepare a brief write up on each one of them. The write up may include the name of the device, the place of its origin, the period when it was used, the unit in which the time was measured by it and a drawing or a photograph of the device, if available.
Answer:
Do it yourself

Question 3.
Make a model of a sand clock which can measure a time interval of 2 minutes (Fig. 13.5). 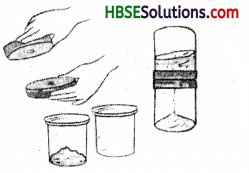 Answer:
Do it yourself

Question 4.
You can perform an interesting activity when you visit a park to ride a swing. You will require a watch. Make the swing oscillate without anyone sitting on it. Find its time period in the same way as you did for the pendulum. Make sure that there are no jerks in the motion of the swing. Ask one of your friends to sit on the swing. Push it once and let it swing naturally. Again measure its time period. Repeat the activity with different persons sitting on the swing. Compare the time period of the swing measured in different cases. What conclusions do you draw from this activity?
Answer:
Do it yourself.

Question 1.
What is motion?
Answer:
Motion is the change in the position of a body with respect to time and its surroundings.

Question 2.
What is uniform motion?
Answer:
When a body covers equal distance in equal intervals of time, the motion is called uniform motion.

Question 3.
What is speed?
Answer:
Speed is the distance covered by a body in a unit time.

Question 5.
What is the use of stop-watch?
Answer:
Stop-watch is used to measure exact time in case of athletic events as it can be stopped and started any moment.

Question 6.
What is a pendulum?
Answer:
A pendulum is a small non-magnetic ball like body, suspended by a light string.

Question 8.
What are the units of measuring speed?
Answer:
Speed is measured in metre per second (m/s) or kilometre per hour (km/h).

Question 1.
Given below is a table showing time taken by a car to travel various distances. What do you infer from this data?

Question 2.
Describe various methods used to measure time in earlier times?
Answer:
There were no electronic watches in earlier times. Measuring time was a little bid difficult. The earliest method of measuring time was based on the position of the Sun. The Sundials were used for this purpose. Time was measured by the shadow casted by the changing position of the Sun from day to night. Chinese made a water clock 6000 years ago. Sand Clock was also used to measure time. Sand Clock was used by Romans. The time taken by sand to fall into the lower chamber from the upper chamber was considered to be the unit of measuring time. The discovery of pendulum helped in determining the exact time before the electronic watches were invented.

Question 3.
What is a pendulum? How does it help in determing time?
Answer:
Pendulum is a simple device which shows periodic motion. A simple pendulum consists of a non-magnetic metal ball called bob. This bob is suspended with help of a string. The open end of the string is tied to a support. Bob of the pendulum is held at a side and released. It starts moving in a to and fro motion. This is called an oscillatory motion. The time taken by the pendulum to complete one oscillation is called time period. This time period is always same with a pendulum having same length. Time period changes with the change in the length of the string. The string of the pendulum is adjusted to the length, that it completes one oscillation in second and it keeps on moving the clock giving us time.