Question 1.
State whether true or false:

Question 2.
Fill in the chart given below with the terms:
hunter-gatherers, farmers, traders, crafts persons,herders
Those who paid the Taxes

Question 4.
Why did the rajas of mahajanapadas build forts?
Answer:
The rajas of mahajanapads built forts because:
(a) People were afraid of attacks from other kings and needed protection.
(b) Some rulers wanted to show how rich and powerful they were.
(c) The land around the people living inside the fortified area could be controlled more easily by the king.

Question 5.
In what ways are present day elections different from the ways in which rulers were chosen in Janapadas?
Answer:
Rulers in Janapadas:
(a) Some of the rajas were chosen by jana, the people.
(b) Around 3000 years ago, some men became recognised as rajas by performing very big sacrifices.
(c) The rulers were only of Kshatriya class.
Present Day Elections:
(а) Presently leaders are elected democratically.
(b) Their position is not hereditary and can belong to any caste or tribe.
(c) Today, each adult citizen has the right to vote and the government is decided by elections in which each citizen casts his vote.

Question 6.
Find the state in which you live in the political map of India. Were there any Janapadas in your state? If yes, name them. If not, name the Janapadas that would have been the closest to your state and mention whether they were to the east, west, north or south. 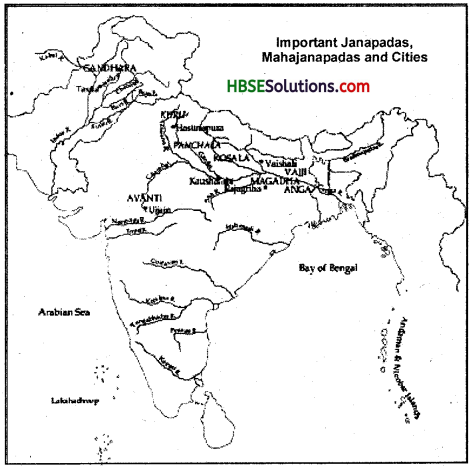 Answer:
Mark the state and then find out the janapadas in your state. For example:
The janapadas’ in the present’day Uttar Pradesh – Panchala, Kosala.

Question 8.
Find out whether the groups mentioned in answer 3 have voting rights at present.
Answer:
Today, voting rights are not decided by gender or profession. Women, kammkaras and dasas – all are entitled to vote today.

Question 1.
What was the ashvamedha sacrifice?
Answer:
It was a horse sacrifice, performed a ruler after the other rajas had accepted his supremacy and authority.

Question 3.
What is painted grey ware?
Answer:
Painted grey ware was a special kind of pottery, which had painted designs, usually simple lines and geometric pattern. Plates and bowls were the most common vessels made. They are extremely fine to touch, with a smooth surface. They were used on special occasions to serve food.

Question 4.
Who were ‘untouchable’?
Answer:
The ‘untouchable’ were crafts persons, hunters and gatherers as well as people who helped perform burials and cremations.

Question 1.
How were the varnas determined? Write about them.
Answer:
Varnas were determined on the basis of birth e.g., if one’s father and mother were Brahmins one could automatically become a Brahmin and so on. Later they classified some people as untouchables. They included crafts persons, hunters and gatherers. The priests said that the contact with these groups was polluting.

Question 2.
How were the armies maintained by the rajas?
Answer:
(i) Soldiers were paid regular salaries and maintained by the king throughout the year.
(ii) Some payments were made to the soldiers using punch marked coins.

Question 4.
How was ‘ashvamedha’ ritual conducted?
Answer:
The ‘ashvamedha’ (horse sacrifice) was the ritual used to recognise men as ‘rajas’. A horse was left to wander freely. If it wandered into another kingdom and the king of that kingdom stopped it, they had to fight. The ‘raja’ who succeeded in the challenge was recognised as stronger. He would then perform the sacrifice in which other kings would also come.

Question 1.
Explain the system of Varnas of the later Vedic period.
Answer:
The Four Varnas: The priests divided people of the ancient India (or Later Vedic Age) into four groups, called Varnas. According to them, each Varna had a different set of functions to perform.
1. The Brahmins:
The first varna was that of the brahmin. Brahmins were expected to study (and teach) the Vedas, perform sacrifice and receive gifts.

2. The Kshatriyas:
In the second place were the rulers, also known as Kshatriyas. They were expected to fight battles and protect people.

3. The Vishs or Vaishyas:
Third were the Vishs or the Vaishyas. They were excepted to be farmers, herders, and traders. Both the Kshatriyas and the Vaishyas could perform sacrifices.

4. The Shudras:
Last were the shudras, who had to serve the other three groups and could not perform any rituals. Generally, women were also grouped with the shudras. Both women and shudras were not allowed to study the Vedas.

Question 2.
What changes took place in agriculture around this time?
Answer:
There were two significant changes in agriculture around this time:
(i) Growing use of iron plough-shares helped in yielding a better grain produce. Heavy, clayey soil could be turn better with an iron plough-share than with a wooden plough-share.
(ii) People began transplanting paddy. This meant that instead of scattering seed on the ground, from which plants would sprout, saplings were grown and then planted in the fields. Production developed due to this since many plants survived.

Question 3.
How did magadha become the most important Mahajanapada?
Answer:
Magadha became the most important Mahajanapada due to various reasons. They are:
(i) Many rivers such as the Ganga and son flowed through the Mahajanapada. This was important for transport, water supply and made the land fertile.
(ii) Elephants which lived in the forest, could be captured and trained for the army. Forests also provided wood for building houses, carts and chariots.
(iii) Iron ore mines in the region could be tapped to make strong tools and weapons.

What Books and Burials Tell Us Class 6 HBSE Notes