I. Answer the following questions:

Question 1.
Why do plates move?
Answer:
1. The lithosphere is broken into a number of plates known as Lithosphere plates.
2. These plates move around slowly a few millimeters each year.
3. It is because of the movement of molten magma inside the earth.

Question 3.
What is erosion?
Answer:
Erosion is the wearing away of the landscape by different agents like water, wind and ice.

Question 4.
How are flood plains formed?
Answer:
During floods, layers of fine soil and other material called sediments are deposited on the river bank. This leads to the formation of a flat fertile flood plains.

Question 5.
What are sand dunes?
Answer:
An active agent of erosion and deposition in the desert is wind. When the wind blows, it lifts and transports sand from one place to another. When it stops blowing, the sand falls and gets deposited in hill-like structure called sand-dunes.

Question 7.
What are ox-bow lakes?
Answer:
An ox-bow lake is a cut-off lake formed due to cut-off of a meander loop.

(ii) The depositional feature of a glacier is :
(a) Flood plain
(b) Beach
(c) Moraine
Answer:
(c) Moraine

(iii) Which is caused by the sudden movements of the earth?
(a) Volcano
(b) Folding
(c) Flood plain
Answer:
(a) Volcano

(iv) Mushroom rocks are found in :
(a) Deserts
(b) River valleys
(c) Glaciers
Answer:
(a) Deserts

Question 4.
Give reasons :
(i) Some rocks have shape of a mushroom.
Answer:
In deserts you can see the rocks in the shape of mushroom, commonly known as mushroom rocks because winds erode the lower sections of the rock more than the upper part. Therefore, such rocks have a narrower base and a wider top.

(ii) Flood plains are very fertile.
Answer:
At times the river overflows its banks this leads to the flooding of the neighbouring areas. As it floods, it deposits layer of fine soil and other material called sediments along its banks.

(iii) Sea caves are turned into stack.
Answer:
As the cavities of the sea caves become bigger and bigger only the roof of the caves remain thus forming arches. Erosion of sea arch breaks the roof and only walls are left. These wall like features are called stacks.

(iv) Buildings collapse due to earthquake.
Answer:
Buildings collapse because of the movement in tectonic plates under the surface of the earth which send out vibrations in all the direction causing an effect to anything built on the crust.

Question 5.
Activity:
Observe the photographs given below. These are various features made by a river. Identify them and also tell whether they are erosional or depositional or landforms formed by both. 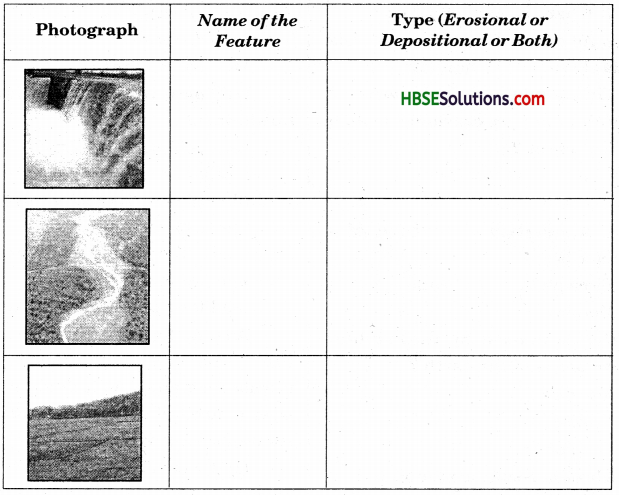 Question 6.
Solve the crossword puzzle with the help of clues given. 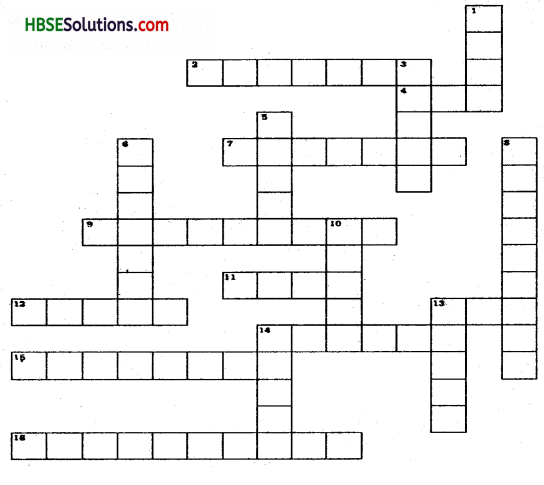 Question 3.
What is a volcano?
Answer:
A volcano is a vent (opening) in the earth’s crust through which molten material erupts suddenly.

Question 5.
What are dunes?
Answer:
Wind-blowing materials deposited in deserts are known as dunes.

Question 1.
Draw a well-labelled diagram of a volcano.
Answer: 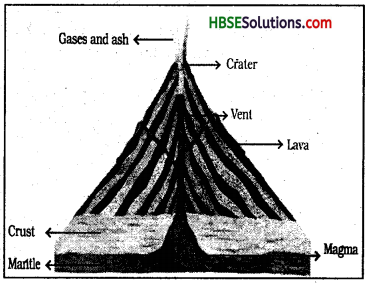 Question 2.
Complete the flow-chart given below:
Evolution of landforms 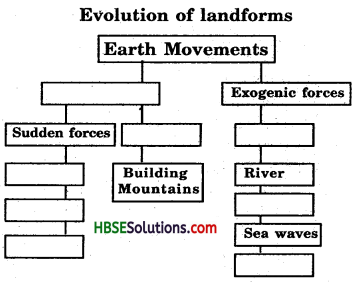 Question 5.
Draw’ a diagram of a delta and mark its (a) main river (b) Distributary.
Answer: 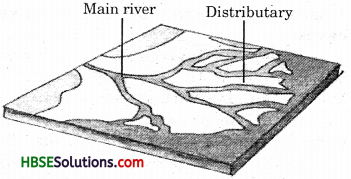 Question 6.
Define river load.
Answer:
The agents of wind, running water, glaciers and sea waves are constantly engaged in eroding rocks and many land surfaces. The minerals in rocks are also dissolved in water. These rock pieces, organic materials and dissolved minerals are called river load.

Question 7.
Give an account of earthquake preparedness.
Answer:
Earthquakes cannot be accurately predicted. However, we can minimise the impact if we are-prepared before hand.
During an earthquake, we should:

(a) Sea waves continuously strike at the rocks. Cracks develop. Over time they become larger and wider. Thus, hollow like caves are formed on the rocks. They are called sea caves.

(b) As the cavities of the sea cave, become bigger and bigger, only the roof of the cave remain, thus, forming sea arches.

(d) Erosion of sea arch breaks the roof and only walls are left. These wall like failures are called stacks.

(b) When the river tumbles at steep angle over very hard rocks or down a deep valley side it forms a waterfall.

(c) While entering the plain the river twists and turn and forms large bends which are known as meanders.

(e) In the due source of time, the meander loop cuts-off from the river and forms a cut-off lake; which is also called ox-bow lake. 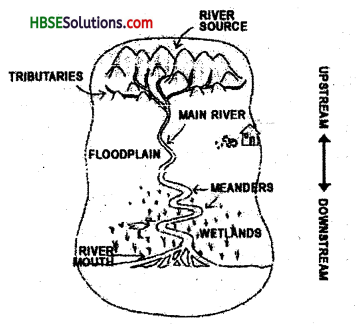 (f) Sometimes, the river overflows its banks causing flood in the neighbouring areas.

(g) As it floods, it deposits layers of fire, soil and other material called sediments along its banks.

(h) The fertile flood plain is formed. The raised banks are called leeves.

(i) As the river approaches the sea, the speed of the flowing water decreases and the river which begins to break up into several streams known as distributaries.

(j) As river becomes very slow and it begins to deposit its load.

(k) The collection of sediments from all the mouths formed a delta, which is a triangular landmass.